In this article, we would deploy the endpoint configuration for our microservices application. As mentioned earlier, we are using Cloud Endpoints for API management to secure, monitor, analyze, and set quotas on our APIs.

Endpoints support version 2 of the OpenAPI Specification.  For more details, refer to https://cloud.google.com/endpoints/docs/openapi/.

The OpenAPI configuration file of our microservice project is provided in script/kube-openapi-backend.yaml.

Open kube-openapi-backend.yaml and replace the host “apis.navveenbalani.dev” with the hostname where your API would be available. My APIs are available at apis.navveenbalani.dev. If you don’t have a host readily available, you can use <api-name>.endpoints.<YOUR-PROJECT-ID>.cloud.goog in host name, replace api-name with the name for your api and YOUR-PROJECT-ID with your google project id. You can later use the host name and map it to the IP address in your DNS settings and use the host name to invoke your service.  For more details, refer to Configuring DNS for Endpoints section at https://cloud.google.com/endpoints/docs/openapi/get-started-kubernetes#configuring-endpoints-dns.

Next, we would deploy the endpoints for the application by following the steps below:

You should see similar messages being printed on the console and a URL being provided at the end to manage your APIs.

In this section, we would create the workload, service, and Ingress for our application. Go to the scripts folder of google-cloud-kubernetes-secure-e2e/scripts project and run the following commands in google cloud sdk/shell.

The backend-cluster is the kubernetes cluster and zone is us-east1-b where our cluster is running.

All incoming requests would first be intercepted by the google endpoint container (kube-esp) which would will direct them to the microservices container (kube-e2e-service). The google endpoint container checks the API key and any rule that you have applied on the API key (quotas, IP address restriction, device restrictions etc.) and then forwards the request to respective endpoints in the microservices container.

In Kubernetes, an Ingress is a resource that allows access to your services from outside the Kubernetes cluster. Ingress resource consists of two components – a set of rules and an Ingress Controller.

The set of rules allows inbound connections to be directed to specific services in Kubernetes. An Ingress controller, which is typically configured as an HTTP Load Balancer implements the rules and direct connections to the respective services.

Follow the steps below to create Ingress for our application.

Next, we would create the SSL secret configuration, which consists of certificate and key for your domain. This assumes that you already have the SSL certificates, otherwise you can generate one using third party SSL provides like letsencrypt. Run the following command

With this, we have setup the Ingress. Next, we would invoke our micro service. 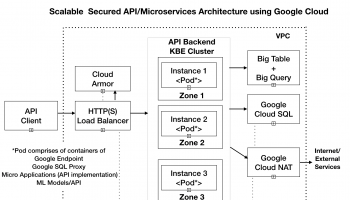